The following content is reincarnated from a street racing site that unwittingly ignited intense interest in all things paranormal.

The Corvette Stingray made its US debut in 1959 at one of them. Mario Andretti and similar big names had early career wins at local tracks like Marlboro Raceway and Baltimore-Washington Track.

No hauntings reported yet, but the pictures we've seen so far look pretty creepy. More info soon. Thanks to Mark for the link! http://forums.maxima.org/showthread.php?t=369665

Built by Tom Lillis, this 1/2 mile asphalt oval with banked turns was located Springfield Road, off Powder Mill Road, near the Baltimore - Washington Parkway. It was originally known as the Baltimore-Washington Speedway for the first 1 1/2 years of operation.

Other divisions hosted at Beltsville Speedway included URC Sprints, Midgets, 10 Winston Cup (then known as Grand National) races, as well as NASCAR Grand American races. During the last few years of operation, Prince Georges County imposed strict noise restrictions and began monitoring the events. This required the facility to build a sound wall and the cars had to begin running mufflers.

The Capitol College technical school now occupies on the site.

Dorsey Speedway was located a few miles south of Elkridge, MD in Howard County near the corner of Route 1 (Washington Blvd) and Dorsey Rd. (Rt. 103, Rt. 100 & Rt. 95) Original owner and builder Dawse Wolf laid out a track closer to Washington Blvd. about 1950 or early 1951. This location proved bad as the track was higher than the spectator area. Through the efforts of Bob Wallace, who would be the first president of the Free State Stock Car Racing Assn., Schmelyum Construction and others, dirt was hauled in and the track relocated further back down Dorsey Rd. The first recorded race at the new ¼ mile clay oval would be on 9/31/51 with Pee Wee Pobletts taking the win. In 1952 it ran Friday and Saturday nights with Free State sanction. In 1953 it was Friday nights only again with Free State. In 1954 it went to a NASCAR sanction and raced on Thursday nights. It was back to Fridays in 1955 and Free State would sanction races there through 1960.

During these years the Sportsman-Modified class was the main division with the Hobby class being started about 1955. There were also specials including Northern Virginia & Pen-Mar late models, midgets and motorcycles. A new addition in 1958 was a dirt road course (using part of the oval) for sports cars. In 1963 the track would be refurbished again to widen the turns and add more banking causing a late opening. In 1964 the track went back to some two night a week racing, with the Limited Sportsman, Hobby and sometimes Midgets racing on Saturdays.

1965 saw several changes to the Dorsey format. The year started with the Sportsman-Modified class as the top division, then shifted to Late Models for a few weeks. By mid summer PA. Promoter Hilley Rife took over and brought in the Central PA. Supermodifieds and Late Models. Also an important addition was the Figure 8 class. They would stay at Dorsey till the end and become one of the most popular classes at the track. Hilley would continue in 1966 and 1967 with the same classes of cars.

One more change was the switch to Saturday nights. The car count was very good through the remaining years as Dorsey developed a local group of driver and owners, some who only raced at this track. The demand for valuable land in the area brought the end to Dorsey as the Myers family sold the track and saw it developed into a warehouse/industrial park. The last race at Dorsey was on Aug 25, 1985 and won by George Kopchak. The following week a Demolition Derby closed out all racing at the track.

Drivers like Mark Donohue, Skip Barber, and Roger Penske raced sportscars here, Mario Andretti won a sprint car race on the oval, the Corvette Stingray made its world debut in a race at Marlboro, and Clark, Stewart, and Ickx drove Cortinas here in a sedan race. The cars at Marlboro ranged from Hillman Imps to 7-liter Cobras, Sprites and 356 Porsches to the 40,000 RPM Howmet Turbine car -- which scored one of its two wins (the only wins ever posted by a turbine-powered car) at Marlboro.

Marlboro Speedway, in Upper Marlboro, MD, USA, was a major feature of the east coast sports car racing circuit. After the success of a 1954 race at nearby Andrews Air Force Base, local SCCA members -- known as "The Lavender Hill Mob" -- convinced the owner of the track at Upper Marlboro to extend the small oval into a sports car track. Marlboro hosted sports car races from the 1955 until 1969.

Drivers like Mark Donohue, Skip Barber, and Roger Penske raced sportscars here, Mario Andretti won a sprint car race on the oval, the Corvette Stingray made its world debut in a race at Marlboro, and Clark, Stewart, and Ickx drove Cortinas here in a sedan race. The cars at Marlboro ranged from Hillman Imps to 7-liter Cobras, Sprites and 356 Porsches to the 40,000 RPM Howmet Turbine car -- which scored one of its two wins (the only wins ever posted by a turbine-poweed car) at Marlboro.

The two biggest attractions of the year were the Refrigerator Bowl, held every January, and the Turkey Bowl, held in November. In between, Marlboro ran regional SCCA races monthly, Sprint cars on the oval every week, 6 and 12 hour endurance races, and a number of drivers' schools as well. It even hosted a round of the Trans-Am series in 1968. Sadly, the track was abandoned in the late sixties due to a combination of urban sprawl and increasing safety regulation. Since it sits in the flood plain and would be nearly impossible to get permission to build over, the track survives today, slowly being overtaken by the trees.

Thanks to the testers -- John King, Bill and Dave Kutz, and Nenne -- for helping me whip this track into shape. Thanks to Eric Bourgouin for textures, BAPOM for the maps and program cover, Keiron for the cameras, Pirenzo for alien setups, and Paul Jackson for hosting the track. Thanks to Brent Adams and the Lime Rock team for a couple of borrowed bits, Lou Magyar, John Basara, and Mark Daniels for advice, the GPLEA for their work and the borrowed esso sign. Thanks to all the toolmakers who make this possible. Thanks to everyone who has helped GPL become what it is today. Thanks to Guru. 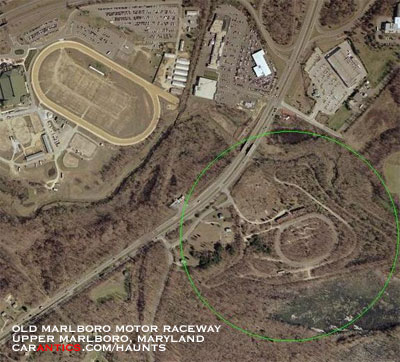 As you pass the start/finish line and prepare to leave the banked oval, move to the right. The crest as you cross the top of the banking will launch you pretty severely if you are on the left. It's downhill and on the brakes into turns one and two, a chicane with good camber...which disappears at the exit to two.

Turn 3 is a hairpin, with more camber on the inside half. The outside here is flat, and slower. Four and five are a combination that puts you on the back straight The braking zone at the end is bumpy and sets up Creek Corner, a 135 degree double-apex left, which gradually builds camber.

Accelerate out of Creek and down towards the Boot -- the braking zone is a tricky kink to the right, followed by the left-hand heel, then toe, that make up the boot.

The next corner -- called Subway -- gradually loses camber, becoming a negative-camber turn by its exit.

Next is Cappy's Corner, named for a local club member at the first race held on the sports car course. Cappy's was a riot. Every different type of car (and some types of drivers) had a different line around Cappy's. It was an agonizingly slow, never-ending turn.

After rounding Cappy's there was a sharp incline to get over the banking of the oval. Entering the oval, as when exiting, it was preferable to be to the right as far as possible. This gave less flight time and a better run to the final turn.

1958 Roger Penske drives his first official race in the SCCA National at Marlboro Motor Raceway in Maryland. After running second, his car overheats.