The following content is reincarnated from a street racing site that unwittingly ignited intense interest in all things paranormal.

Washington, D.C.'s "The Washington Monument" is the best-known DC-area obelisk, being (in case you didn't know) the tallest unreinforced free-standing masonry structure in the world.

The Masonic Temple (within eyesite of #1, in central Alexandria, Virginia) is #2. Interestingly, G.W. was a Mason. 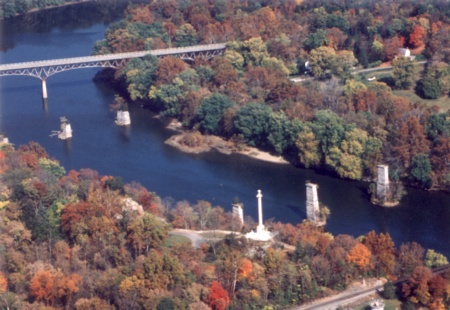 Much lesser known, a third obelisk is sits on the Potomac in (relatively) nearby Shepherdstown, West Virginia: the James Rumsey Bridge/Monument. Across the river is C&O canal Lock #38. Shepherdstown is the oldest in WV. James Rumsey demonstrated a steamboat twenty years before Robert Fulton, but it was not a commercial success and the glory escaped him.

Popes Creek, VA has obelisk #5, at George Washington's birthplace. In case you were curious, Big George also lived at Mount Vernon, Virginia and at Ferry Farm (near Dickerson, Maryland). There's also a small obelisk over GW's grave in Mount Vernon. They have George and Martha all tombed up together in a locked mausoleum in a tree grove on the Mount Vernon grounds. K-reepy.

Another Baltimore obelisk stands at Herring Run Park (Mount Vernon neighborhood/Peabody Conservatory at Madison + Centre Sts.; moved in 1964 from North Avenue east of Harford Road): the world's first obelisk dedicated to Christopher Columbus. Baltimore has two other monuments to Columbus, too! Getting smaller in height but not in scope, Edgar Allan Poe's gravestone is an obelisk. 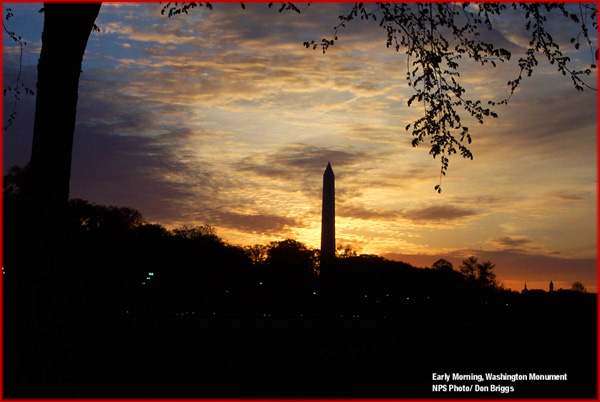 James Rumsey was an 18th century blacksmith in Shepherdstown who transformed himself into a modern scientist. According to ironworker/Rumsey expert, Dan Tokar, Rumsey seemed to possess a three-dimensional laboratory in his mind's eye where he created objects never before seen or touched by man. He would assemble these figments in his imagination, making the resulting contraption go forward, backward, constantly re-creating their particulars to suit his fevered fancy.

Most of his time was spent repairing all things iron in his village, making him a man central to much activity. He would also be hired to study grist mills along the Town Run en route to the Potomac, spending hours trying to figure new ways water could be directed to hit a water wheel or other surface to generate the most motor power with the least waste of water power. One day he obtained a copy of John Theophilus Desaguliers' exposition on the principles of Newtonian physics. Surely what must have freed his mind was its simple dictum: "For every action, there is an equal and opposite reaction."

His inspired work on directing water to create power easily segued over to a new way of looking at this old problem: enclose water, heat it, and direct the steamy pressure out a controlled passage. Using only the crudest supplies, he banged out a boiler from pieces of guns and scraps from the Antietam Iron Works directly across the river in Maryland.

In a scene right out of the movies he chanced to meet the revered Gen. George Washington in September, 1784, in an inn in Berkeley Springs. When Washington rose to leave he may have - figuratively - already agreed to not only pay for his meal, but to pay Rumsey to build him a house in the town, and to witness a demonstration of this intriguing man's new-fangled craft - the steamboat.

From that day on, Gen. Washington spent inordinate amounts of his energy chasing a dream of unifying the young country's inland natural resources and the coastal ports, relying primarily on a canal system and steamboats like the one this fellow Rumsey would make. Washington started by hiring Rumsey to be the engineer to the Patowmack Company to develop this vision.

When Rumsey's steamboat was successfully tried on the banks of the Potomac in Shepherdstown on December 3, 1787 with Gen. Horatio Gates, Henry Bedinger and many others on hand, this steamboat worked some twenty years before the better-known steamboat of Robert Fulton. In truth, Rumsey's steamboat, which taught Fulton much, would have won a science fair and maybe not alter history. Venture capital was not accumulated so early in our history to help. Crucially he yielded to the erroneous advice of no less than Ben Franklin, who said paddlewheels would not be needed to make the boat work just fine. He was very wrong. Fulton made sure his boat combined paddlewheels and steam propulsion. Fulton's boat went much faster.

Armed with a letter of introduction from Franklin, Rumsey, the "country mouse," set sail in 1788 for the world capital of commerce - London. During his time in Europe, he even spent a day in March, 1789 "talking shop" with Thomas Jefferson, then our ambassador in Paris. Each man wrote a friend of the “interview.”

Rumsey wrote Benjamin West March 20th. He uses a humorous code equating his designs to a hobby horse, fearing the loss of a trade secret to other claimants to being the steamboat’s inventor.

“I have this day had a good ride upon my hobby. It was by the particular request of our American Embassader that I took this ride, and glad I was of the opertunity of mounting, having been so long out of practice, by being in a Country where the people could not understand the Language in which I explained hobbys gates. Mr. Jeffersons Hotel was the place appointed for me to Exercise, and I had not been long mounted before Mr. Jefferson bore me Company, and fine sport we should have had, would time have permitted; but dinner time came on and Company arrived that had been invited to dine. The horse was therefore obliged to be Stabled; however Mr. Jefferson was so pleased with hobby, that he borrowed him of me, with the Explanation of his gates. - I know very well that what I have said will convey to you a Very Clear idea of the business of the day, but I beg you not to explain it to anybody (not nobody) in the Same way. To be Serious, you cannot Conceive how attentive Mr. Jefferson has been to my business. He has been to the Hotels of a great number of the nobility to gain their interest in my favor. But the most of them are unfortunately for me in the Country at the Election now holding. When they return I have no doubt but I shall succeed in the object of my Journey.

“What is much in my favor is Mr. Jeffersons being the most popular Embasador at the French Court. They are Certainly fond of america in this Country, for American principles are bursting forth in Every quarter; it must give great pleasure to the feeling mind, to see millions of his fellow Creatures Emerging from a state not much better than Slavery . . .’

On March 24th, Jefferson wrote a “Mr. Willard” about his meeting or “interview” with Rumsey:

“(Rumsey) His principal merit is in the improvement of the boiler, and, instead of the complicated machinery of oars and paddles proposed by others (John Fitch - ED), the substitution of so simple a thing as the reaction of a stream of water on his vessel. He is building a sea-vessel at this time in England and she will be ready for an experiment in May. He has suggested a great number of mechanical improvements in a variety of branches; and upon the whole is the most original and the greatest mechanical genius I have ever seen . . .”

Just weeks after arriving in London, Rumsey landed an interview with potentially perfect sponsors: James Watt and Mathew Boulton, the owners of the world's largest steam engine company. They were now in the black and ready to do business.

Boulton had two stacks of patents and drawings to evaluate - one of Rumsey's work, the other of a relentless rival, John Fitch - both claiming to have invented the steamboat, both with a large state's backing and charter. Perhaps after slipping on his pince-nez and filling his cup with tea or something stronger, Boulton's informed eye wandered over Fitch's papers, and soon thereafter shoved the pile aside as being spurious. He then began entering Rumsey's world - his three-dimensional imagined laboratory - going through Rumsey's magnificent drawings rendering, for example, the shallow draft for steamboats that would cover the Mississippi River decades later. He perhaps was in awe of one particular "thought experiment:"

Studying the Archimedean screw, the corkscrew shape used to extract corks from wine bottles, Rumsey imaginatively looked at this shape from the end, "flattened" it to two dimensions and began calling it a "propeller." Not bad for a man living at a time when propellers were not yet pushing iron ships across the Atlantic and lifting airplanes through the skies.

Boulton brought Rumsey back in and said: "We shall make an offer to you that we shall not make to any other," which was ownership in their company, in exchange for Rumsey's creating for them steamboats to sell in America. Had there been email or telephones, this could have been easy to say yes to. But the innocent country blacksmith feared accepting the offer would somehow betray his sponsors, including Franklin, at the Philosophical Society in Philadelphia, who paid for his voyage. Most certainly they sent him to London to get just such an offer as the one made.

While Boulton fumed and waited, John Vaughn, a poor choice of advisor and agent, continuously fed Rumsey with doubts about this sterling offer. Poor Rumsey did not know Vaughn had his own secret designs to start a rival company in Ireland. Rumsey escaped the discomforts of this dilemma by immersing himself happily in the building of another boat, the "Columbia Maid," to be tried on the Thames. He fell deeper and deeper in debt in a city of huge debtors' prisons that were quite full.

Finally, the letter from Boulton came - "Sir (Mr. Rumsey) it seems you counter-balance substance with shadows . . . You, sir, have mistaken the road for the goal." Boulton was suggesting that Rumsey, like many inventors, wrongly believed that creating the final drawing was the hardest part of creating a manufactured, saleable product.

Desperate and sponsor-less, with Vaughn's talk only that, Rumsey wrote a friend in Shepherdstown that he was actually visiting the debtor's prisons and seeing their wretched inmates, certain that "someday this too will be my home." He could not tell his wife, with two children, in Shepherdstown in a cabin on Duke Street (the site of today's Catholic rectory).

On the eve of the trial of the new boat, and very much in debt, Rumsey rose to speak before the Philosophical Society in London. He was almost breaking with stress. The room for him began to spin and spin, then went black. When they revived him briefly the next morning, James Rumsey's last words were: "I must die."

Even though he had been in London only for months, he was buried in St. Margaret's Chapel at Westminster Abbey. They knew already what sort of man he was.

And there was another man also in London with common friends of Rumseys, named Robert Fulton. A recent edition of the "World Book Encyclopedia" notes that Rumsey died in 1792. Fulton's entry says the year he began working "in earnest" on the steamboat was - 1792. Perhaps he got started by taking a carriage to the London Patent Office and asking for the file marked "Rumsey." He too knew what sort of man he was.

Missiles are obelisks, too, no?